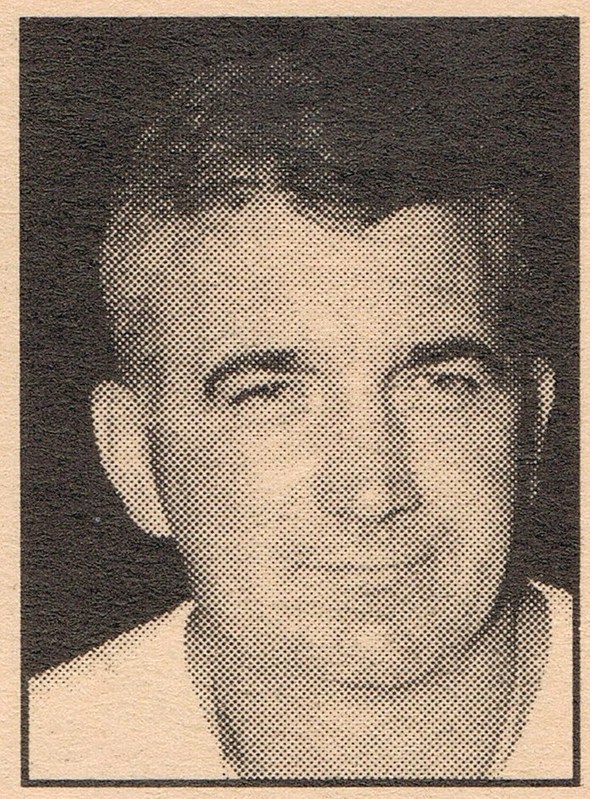 “Jan” was an outstanding athlete, earning 11 prep letters and 3 football monograms at IU. He was named to the 1940 Midwest College All-Star team which played against the Cleveland Rams. But he is being honored as one of the area’s outstanding football coaches. His 85-45-6 record at EHS includes a perfect 10-0 season in 1963 and the title of state champion. That team was ranked 10th in the nation. His 1964 team was 91, ending as No. 2 in the state. Before losing 6-0 to SB Washington, he had racked up 16 straight Rice Field victories and 15 straight NIC triumphs. Janzaruk started his coaching career at Cathedral High, Indianapolis, then moved to New Castle High, before returning home to coach the Slicers of LaPorte. He came to Elkhart in 1952 and coached through 1966 before entering private business. His 26-year football coaching totals were 141 victories, 92 losses and 7 ties. Among the players he coached were great pros Erich Barnes of Elkhart and Dick Alban of LaPorte and prep All-American Mike Franger. “Jan” is a member of the LaPorte High Hall of Fame and in 1980 was inducted into the Indiana Football Hall of Fame. He also was named an Honorary Secretary of State in 1980.